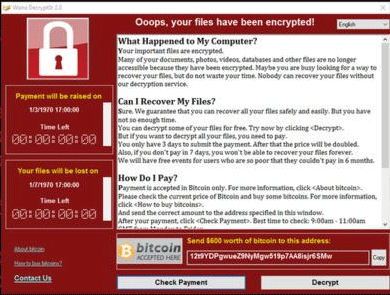 According to experts tracking and analyzing the worm and its spread, this could be one of the worst-ever recorded attacks of its kind. The security researcher who tweets and blogs as MalwareTech told The Intercept “I’ve never seen anything like this with ransomware,” and “the last worm of this degree I can remember is Conficker.” Conficker was a notorious Windows worm first spotted in 2008; it went on to infect over nine million computers in nearly 200 countries. As The Intercept details

Security firm Kaspersky Lab has recorded more than 45,000 attacks in 74 countries in the past 10 hours. Seventy-four countries around the globe have been affected, with the number of victims still growing, according to Kaspersky Lab. According to Avast, over 57,000 attacks have been detected worldwide, the company said, adding that it “quickly escalated into a massive spreading.”

According to Avast, the ransomware has also targeted Russia, Ukraine and Taiwan. The virus is apparently the upgraded version of the ransomware that first appeared in February. Believed to be affecting only Windows operated computers, it changes the affected file extension names to “.WNCRY.” It then drops ransom notes to a user in a text file, demanding $300 worth of bitcoins to be paid to unlock the infected files within a certain period of time.

While the victim’s wallpaper is being changed, affected users also see a countdown timer to remind them of the limited time they have to pay the ransom. If they fail to pay, their data will be deleted, cybercriminals warn. According to the New York Times, citing security experts, the ransomware exploits a “vulnerability that was discovered and developed by the National Security Agency (NSA).” The hacking tool was leaked by a group calling itself the Shadow Brokers, the report said, adding, that it has been distributing the stolen NSA hacking tools online since last year.

Predictably, Edward Snowden – who has been warning about just such an eventuality – chimed in on Twitter, saying “Whoa: @NSAGov decision to build attack tools targeting US software now threatens the lives of hospital patients.”